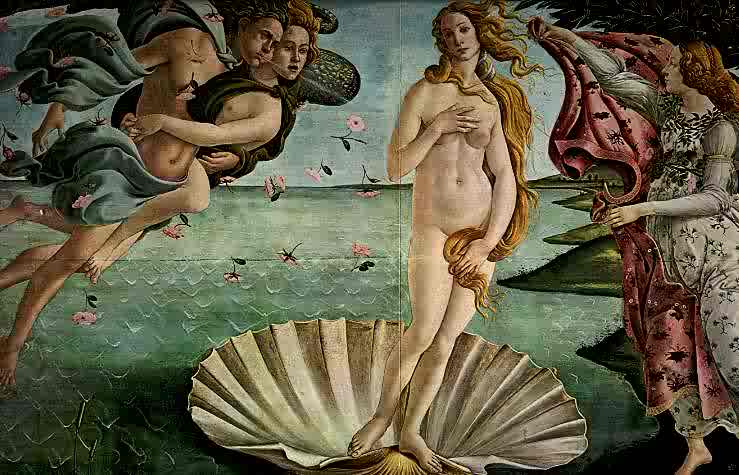 
"Ouranos (the Sky) came, bringing on night and longing for love, and he lay about Gaia (the Earth) spreading himself full upon her. Then the son [Kronos] from his ambush stretched forth his left hand and in his right took the great long sickle with jagged teeth, and swiftly lopped off his own father's members and cast them away to fall behind him ... and so soon as he had cut off the members with flint and cast them from the land into the surging sea, they were swept away over the main a long time: and a white foam spread around them from the immortal flesh, and in it there grew a maiden. First she drew near holy Kythera, and from there, afterwards, she came to sea-girt Kypros, and came forth an awful and lovely goddess, and grass grew up about her beneath her shapely feet. Her gods and men call Aphrodite, and Aphrogeneia (the foam-born) because she grew amid the foam, and Eustephanos (well-crowned or girdled) Kythereia because she reached Kythera, and Kyprogenes because she was born in billowy Kypros, and Philommeides (Genital-Loving) because sprang from the members. And with her went Eros (Love), and comely Himeros (Desire) followed her at her birth at the first and as she went into the assembly of the gods. This honour she has from the beginning, and this is the portion allotted to her amongst men and undying gods, - the whisperings of maidens and smiles and deceits with sweet delight and love and graciousness."
- Hesiod, Theogony 176

"I will sing of stately Aphrodite, gold-crowned and beautiful, whose dominion is the walled cities of all sea-set Cyprus.
There the moist breath of the western wind wafted her over the waves of the loud-moaning sea in soft foam,
and there the gold-filleted Hours welcomed her joyously. They clothed her with heavenly garments: on her head they put a
fine, well-wrought crown of gold, and in her pierced ears they hung ornaments of orichalc and precious gold, and adorned her
with golden necklaces over her soft neck and snow-white breasts, jewels which the gold-filleted Hours wear themselves
whenever they go to their father's house to join the lovely dances of the gods. And when they had fully decked her,
they brought her to the gods, who welcomed her when they saw her, giving her their hands. Each one of them
prayed that he might lead her home to be his wedded wife, so greatly were they amazed
at the beauty of violet-crowned Cytherea. - Homeric Hymn to Aphrodite

Aphrodite (her name means "born of the foam") is a Greek goddess of love, passion, sexuality, sensuality, the arts, pleasure, beauty, fertility, joy and she is, of course, a goddess of the sea from which she emerged. She is the elixir of life, the lifeforce that courses through us all.¹ She is also a death goddess and has her darker side. (Hey, what can you expect from a goddess of love and passion?) To the Ancient Greeks she was known as the Goddess of Death-in-Life, which may be derived in part from the orgasms (sometimes known as "little deaths") that were had in her honor and probably has deeper spiritual connotations, as well. In Athens she was acknowledged as the Eldest of the Fates and sister of the Erinnyes. She was called Melaenis - Black One, Scotia - Dark One, Androphonos - Man-Slayer, and Epitymbria - Of the Tombs. In her lighter moments she was known as Queen of Heaven. She can be traced to the Phoenician goddess Astarte who is associated with the Babylonian goddess Ishtar and has more obscure connections to the Egyptian Goddess Isis who evolved from the Egyptian Goddess Hathor. She was later adopted by the Romans as Venus. The Christian Black Virgin also seems to have roots stemming from the Great Aphrodite and many believe she was the model for what evolved into the Christian Mary, Mother of Jesus and probably the Christian Mary Magdalene, as well. The Spartans worshiped her as a warrior goddess.

There are a few stories as to Aphrodite's birth. In the most legendary, Hesiod's version, she is known as Aphrodite Urania (Celestial Aphrodite), daughter of Uranus (Heaven) and Goddess of Pure and Spiritual Love. In this version she is a major player, goddess-wise having been born from the act that split Heaven and Earth creating the world in between. She is a Creation Goddess who's been around since the beginning of Earth as we know it in the physical realms. The story goes that Kronos castrated his father Uranus, tossing
his severed genitals into the sea. The water bubbled around them mixing with his blood and semen, creating foam, and Aphrodite was born of that sea foam. There she magestically arose naked & lovely, from the sea, on a scallop shell. In Homer's version she is called Aphrodite Pandemos (Aphrodite-of-the-People) and is thought to be

daughter of Zeus and the Titan, Dione and Goddess of Physical Attraction and Satisfaction. Here she is viewed as a minor goddess and has been downgraded to a more carnal role. More obscure versions say that she was born of Oceanus and Tethys or of the union of Air and Earth (Heaven and Earth - similar to Hesiod's version). It is in the fourth century that she was divided into two and split between the higher and lower realms.


Although forced by Zeus to marry Hephaestus, she had many lovers; both Gods and mortals and many children by them (the most well-known being Eros, the Roman Cupid, whom she is often portrayed with). Due to her fiercely passionate nature those on her good side were treated fabulously, but those on her bad side tended to pay dearly. She had a temper. Aphrodite was very generous in using her powers to help her followers, but she was also known to punish or destroy those who tried to disrupt or prevent the natural order and destiny of love and sexuality.

It is widely believed that she first stepped foot onto the island of Cyprus as she emerged from the sea, but in actuality, the island of Kythera has that claim to fame and that is where the first temple to her was built and where she is now worshiped as the black Virgin, Panaghia Myrtidiotissa, who has local ties to her. "Myrtidiotissa, "goddess of the myrtle," was one of Aphrodite's names, acquired when Eve-like she grabbed some myrtle branches to cover her nakedness on arriving at the island. The present religious story is that a shepherd heard a voice calling to him from a myrtle bush. He went to it and discovered the dark-faced icon of the Virgin (yet another of Aphrodite's many titles). This mysterious icon is renowned for its healing powers and is a local pilgrimage stop for the people of Kythera."²

Aphrodite was at first adored as a goddess of pure love (Aphrodite Urania), but as time progressed she was worshiped as a goddess of carnal love (Aphrodite Pandemos). Perhaps due to her descent and settling into matter. Perhaps due to her split between Heaven and Earth. Mostly due to rulers of the time wishing to cast her in an unfavorable light to the masses due to the unique practice of her followers serving time in her temples as Temple Whores (in a sacred way). She was widely worshiped and adored throughout the region and was a very popular goddess. Temples to her have been found as far east as Egypt, Libya, and Syria. Her sacred orgies are legendary. At the time, although eventually frowned upon by non-devotees, they were considered sacred and solemn and approached with the utmost respect. Her sole purpose, above all else, was to make "love." Through the ages she has inspired statues, temples, paintings, pottery, coins, music an\\\\\\\\ songs. Her popularity remains to this day as she is one of the most well known and recognized goddesses of the Greek Pantheon. She remains an inspiration to people all over the world, not only artistically, but by her spirit, as well.

Attributes - She rules all issues heart-related including conception, fertility and death and emphasizes Divine
Grace and Beauty both outside and within; look to her for confidence and for your inner goddess to burst through and shine. She has also been known to help sailors in trouble when they call for her. Symbols - shells, dolphins, white doves and feathers, swans, geese, hearts and mirrors (especially hand-
held ones) Colors - pink, red, white, green, azure, the blue of the sea Crystals and Gems - rose quartz, rhodochrosite, turquoise Oils - rose, geranium, jasmine, musk, vanilla, cinnamon . . . any oil that inspires passion, sweet, seductive sensuality, beautiful feelings and joy Flowers - roses, especially pink, white or red - all flowers in those colors, also lilies and lime trees Food - pomegranates, grapes, figs, strawberries, chocolate, lime, apples Day of the week - Friday Celebration Days - Beltane, Summer Solstice, Samhain, Full Moon Her Magic - To attract Aphrodite's blessings and confidence: Light pink or red candles invoking a light-hearted, joyous, bubbly and sparkly love vibe during the waxing or full moon and dance around or look in a mirror (preferably hand-held) and chant: "Oh, Aphrodite . . . sweet, hot one, bring your magic to me with lots of fun. Share your beauty inside and out, help me shine, without a doubt."  Blessed Be!!:) Links - Historical Kythera - http://www.elysiumgates.com/mt_olympus/histkythera.html        Aphrodite (Very extensive) - http://www.theoi.com/Olympios/Aphrodite.html