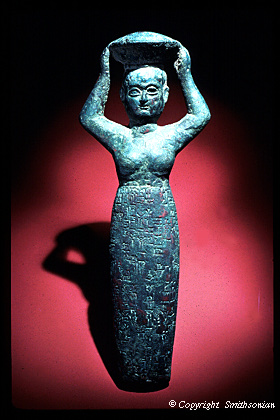 Facing Death
by Artesia
Do not let your heart's ceasing
stand as a granite monument
to what you fear is not accomplished.
Know instead that since your birth
you have planted seeds of change
and compassion into many hearts.
And your voice raised in song
shall fly in the wind like a sun
kissed prayer flag connecting
your essence through women
for generations to come.

Nisaba, also known as Nidaba, is the Sumerian Goddess of writing. She inspired the invention of Cuneiform in southern Mesopotamia. Cuneiform recorded events at the temple and information about trade in both Sumerian and Akkadian. It was also used to record the foreign languages of Elamite, Hittite and Urartian. (1) Cuneiform also recorded personal letters and stories. One of the most famous of these is the “Hymn of Innana.”

Nisaba is the patron Goddess of writing, literature, wisdom and scribes. She is therefore associated with all accouterments of Sumerian writing including the stylus, writing boards, scribes and clay. Typically, scribes would end their writing with the sentence, “Nisaba be praised!” (2) Her name means “Lady of Saba.” (2) As a side note, PBS recently aired a show about mythology, where the host went on quests to unravel some of history’s mysteries including King Arthur’s round table, the Holy Grail and the Queen of Sheba. During the Queen of Sheba show, the host visited Saba, which was a flourishing town on the spice route. He stated that Sheba is Saba.) Nisaba’s cuneiform sign NAGA depicted different kinds of grain. (2) Her pictograph name was an ear of corn. (2) She is also associated with lapis lazuli which is excellent to counteract depression.

One hymn describes her as…

“O Lady colored like the stars of heaven, holding the lapis lazuli tablet, born in the great sheepfold by the divine Earth…born in wisdom by the Great Mountain (Enlil), honest woman, chief scribe of heaven, record-keeper of Enlil, all knowing sage of the gods.” (2)

Nisaba today can be associated with all aspects of writing and learning: libraries, teachers, schools, students, writers, poets, lyricists, lawyers and even the internet. She can bless our books, checkbooks, paper, pens, computers, printers and websites. To celebrate Nisaba, find a piece of blue paper and find or buy a pen that feels good when you use it. Then write to yourself, or another woman important to you, a love letter, reminiscent of the old hymns. Praise her strengths and abilities. And tell her how much she means to you. If this woman is alive, consider sharing the letter with her. If she isn’t or if this about you, fold the letter and write Nisaba’s name on the outside. Then place it under your pillow and ask the Goddess to send you dreams of a wonderful woman.

For those of you who struggle with dreams, particularly remembering them, I’ve found that every time I’ve asked the Goddess to send me dreams, she does. What I suggest you do is put a notebook and pen by your bed. Eat a slice of your favorite bread – especially potent if you’ve baked it yourself. Be sure to pay attention to the smell of the bread as you eat. Then take a bath and purify yourself. Then take a piece of notebook paper and draw a spiral in the middle of it. Fold the paper in half and fold the edges so that you can place a few rose petals inside with the spiral. Then write Nisaba’s name on the outside of the paper and put it under your pillow. After that what I do is pray, visualizing that each difficulty, concern or issue of mine is placed into a basket and then I visualize myself lifting the basket up to the Mother Goddess so that these concerns are hers. Once the everyday issues are gone, I pray to Nisaba and ask her to send me dreams.

In November 2005, I participated in NaNoWritMo (National Novel Writing Month). My goal was to write 50,000 words by November 30th. I did accomplish this task with help from: 13 Moons who sent me a gorgeous spider candle to help with creativity (I burned this candle every time I sat down at my computer to work); my chiropractor who helped with a rushing buzz of energy that overwhelmed me during the first week; Granny Moon, who suggested I place the energy in the floor so that I could store it until I needed it again (which I did every time I left the computer); my mother who watched my three year old and my four year old for two days every week so that I could find some quiet time during the day to write before I had to pick my six year old up from school; and Nisaba. I prayed to the Goddess everyday and sometimes multiple times a day to be with me as I worked. I had prepared six plot points prior to beginning my writing. I reached those near 25,000 words. The Goddess helped me write the remaining 25,000, allowing me to tap into her for additional creativity and ideas.

Because of copyright issues, I can not place an excerpt on-line for you to read and, in truth, the story is not finished. I plan to complete the story arcs of my characters and then rewrite and revise. I hope someday to publish the book. Without a doubt, this beginning is my tribute to Nisaba, but I hope to see her name in print, in the forward of my novel. And that will be my final project art to celebrate her.

This page is the creative and intellectual property of Artesia